how to spot propaganda in fandom spaces

And why this is needed.

This guide goes over how to spot propaganda, many common symbols and tactics of the alt-right, and how we can help defend the fandom from the alt-right.

Feel free to share this guide anywhere online - it is a free fandom resource.

Why is this needed?

Many far right groups and white nationalist groups target furries in particular. Many of these groups target furries due to the perceived notion that furries are desperate to be part of a larger group, as they believe most furries are "social outcasts". Many of the people who "recruit" furries are not even in the fandom themselves and want nothing more than to radicalize members of our group. Below has many of their tactics to keep an eye out for, if you spot them, say something and do not allow others to become snared in their web.

Other ways that people can become radicalized are through common multimedia pathways, such as YouTube or twitter. They often use punchy clickbait titling or wording to draw people in. Many videos show combative style arguments edited down to highlight reels of people on the left side losing the argument. They often use wording such as - Leftist/Feminist/Stupid/Uninformed is destroyed/humiliated with facts/logic to draw users in. And this works - very very well.

The Stages of the Alt-Right Pipeline

Note: Not everyone will follow these stages, but they are the most common.

The First Stage - Starts with normalization of behaviors. There is likely little overt racism in this stage, instead there is rampant memes and trolling. This allows racist and misogynistic content to be shared ironically or as a joke. This allows the content to be shared quickly and mimicked. This behavior slowly becomes normalized and it gives the poster themselves plausible deniability. "It was just for banter." or "I didn't really mean it." are commonly heard in protest when called out for sharing these kinds of memes.

The Second Stage - Acclimation. Think of this stage as climbing a mountain. Users get numbed to the initial memes and they started on and advance towards other types of media. These often include videos with titles such as "feminist gets owned". They then get used to the talking points in these videos and then move on - oftentimes without realizing their views shifting further right. Due to the sheer volume of alt-right content, it is impossible for each person to realize where they start and where they end - they become stuck in a feed where most videos on their timeline have alt-right leanings.

The Third Stage - Dehumanization. In this stage members are taught to dehumanize people who are not like themselves. Now stuck in their own echo chambers - likely some made by themselves but also by how media is presented to them due to algorithms - they begin to see SJWs, Muslims, Jews, Marxists, and the LGBT community, not as people but as nameless beasts. This dehumanization allows for the alt-right call for violence against their opponents, without suffering the moral consequences. They begin to not see the contradictions made by people they trust as they are focused on their hate of the other groups.

They often say things that everyone would agree with, such as pedophilia or zoophilia being bad - but then conflate it with things they just do not like - for example the LGBT community. An equivalence is drawn between two subjects based on flawed or false reasoning to make both arguments seem to hold equal weight when in fact - they do not. In doing this they can make someone draw false conclusions between two completely different things, and make them seem equal in their eyes.

Not every topic warrants a “both sides” approach. Some viewpoints are simply not backed by empirical evidence or are based on false information.

How not to fall for this - simply be skeptical. Check sources and make sure they are from reliable people or well-regarded academic or journalistic institutions. And most importantly - check your own biases. Is there a reason you would want them to be correct in this statement? If so, why would you want what they said to be true. Check opposing viewpoints and analyze their arguments.

Fear is always a big factor these groups use to turn people into their side of thinking. It is easy to convince someone that a group of people is bad when they have not had any experiences with them. They can use things that rarely happen- but may happen to feed these fears, such as being falsely accused of assault.

They keep an us vs. them mentality in their members. They make them feel safer within the group than outside of the group. They do this mainly by isolating members so they do not see any other viewpoints or by making other viewpoints seem lesser. By maintaining the superiority of themselves they are able to keep their members in control

How to combat this - be aware of your own vulnerability. Everyone wants to feel wanted and as part of a group. If you do feel like you are being pushed out of other groups, try to understand why. This may not be an easy task and may take lots of self discovery to fully understand, but there are ways to get better.

Dog whistles use language which appears normal to the majority, but which communicate specific things to intended audiences. They are generally used to convey messages on issues likely to provoke controversy without attracting negative attention. There are many dogwhistles related to Nazism and White Supremacist's that are common online, here are a listing of a few most common ones to keep an eye out for.

This is used in reference to the holocaust and is used by holocaust deniers to signal to each other. They use it in reference to the gas chambers of Nazi work camps as being made of wood, and so they believe the gas would have been able to escape. There is simply little evidence to support there even being wooden doors in the first place, and even if there was; the concentration of gas inside would still be enough to kill.

A cast of a holocaust gas chamber door made of metal

1488 is a combination of two popular white supremacist numeric symbols. The first symbol is 14, which is shorthand for the "14 Words" neo-Nazi slogan and the second is the 88 mentioned previously.

The number 13 used in conjunction with either the number 52 or the number 90 is a shorthand reference to racist propaganda claims by white supremacists against African-Americans to depict them as savage and criminal in nature.

However, this figure does not show up in the survey itself and is not considered an accurate one. In any case, it should be noted that the vast majority of violent crime is intra-racial (committed by a person of one race against a person of the same race), not interracial, in nature.

White supremacists typically employ references to 13 (by itself), 13/50, 13/52 or 13/90 in response to social media posts, and in the comments sections of news stories about crimes in which the suspected perpetrator is African-American. In some instances, white supremacists use the numbers as a purported police radio code, using language like, “We have a 1390 in progress.”

6MWE This is code for “6 Million Wasn’t Enough” is a not-so-veiled reference to the Holocaust. May be found in comment sections, chats and bios.

Multiple parentheses—or the "echo," as it is sometimes referred to—is a typographical practice used by some anti-Semites on-line. It typically consists of three pairs of parentheses or brackets used around someone's name or around a term or phrase.

When used around someone's name—such as (((Natalie Weiss)))—it is intended by the user to indicate to others "in the know" that the person being referred to is Jewish.

How can I find out if what I am seeing is a hate symbol? 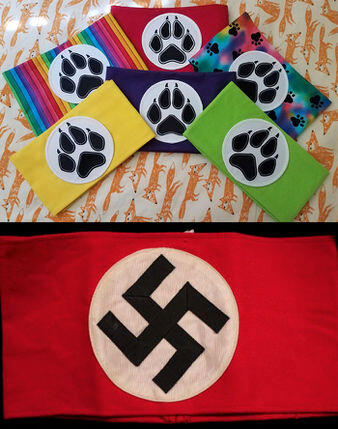 The Furry Raiders has been using the iconic Nazi armband as a symbol for many years, denying it's origins, trying to obscure the fact that it is a hate symbol. Most people using this armband in real life or on their fursona likely affiliates with the groups above. To learn more about the group refer to the podcast listed on the top of this guide.

How to Defend the Fandom against these groups

Build offline communities in real life. - Make sure there are strong support systems in the fandom. People who feel like they do not fit in anywhere in the fandom are more likely to become radicalized - as people prey specifically on people with little to no support systems. Starting events locally is one way to bring people together and to help them find their support system in the fandom. This doesn't just apply to conventions; furmeets and get-togethers are a great way to have people step outside of their online bubbles. A step in the right direction would be to keep an eye out for known toxic behaviors at these events and try to correct them as necessary.

Alienating people does not work - it often can pull them deeper into the alt-right pipeline. Feel free to block anyone if they make you uncomfortable, but always let them know why you are doing it. Never argue basic human rights as it can lead to them doubling down on their ideas.

Make people in our community feel safe - during conventions ask friends if they would feel safer if they walked with someone back to their room. Build each other up and work hard to protect each other.

Be knowledgeable about how these groups operate and how they contact their victims. Speak out if you see anyone doing something you know is not right.

Keep an eye out for propaganda that may be more vague or hidden. If a friend posts a meme that seems off - or if they say something you know to be hateful - let them know. Bring it to their attention that it isn't okay or right to say it and why. Do not be harsh - let them know why it isn't alright and tell them you do not stand for what they said. If they do not change their mind you may need to be very careful with what that friend shares with you.

Furries are all about inclusion. We want everyone to feel comfortable in our community and often make it a point to try to make it comfortable for everyone. However, this can be a two sided coin. The furry fandom should not tolerate hatred and abuse.